In 2002, during my inaugural visit to the little Colorado plains town of Holyoke, Colorado, the first stop that Carrie and I made was at the corner of Kellogg Street and Reynolds Avenue.

This was the home of Elton and Eunice Oeltjenbruns, Carrie’s Grandpa and Grandma.

My new girlfriend Carrie was 20 years young, and I was 22.

When we walked into the Oeltjenbruns home, nearly the entire family was there… uncles and aunts, Carrie’s mom Susan, and, of course, Elton and Eunice.

Within a couple hours of getting acquainted for the first time, and undoubtedly playing Yahtzee or learning one of the many card games they liked to play, I was sitting on the couch in their living room. I had probably told them that I had just gotten back from a semester studying abroad in Germany.

So they wanted to share their pictures with me of their travels to Germany.

I’m not 100% certain on this, but I believe that Eunice went to Germany just one time in her life, while Elton went there twice… once with Eunice, and once more than 30 years earlier, as a soldier in the US Army, sent to free Europe from the Nazi party. 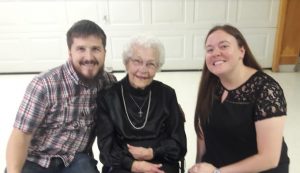 Eunice did a great job, such a great job, of caring for her family’s memories through the photos she took and the way she cataloged them.

Looking through their photo albums that first meeting was a bit surreal for me.

Standing at that very same spot on the banks of the Elbe River had meaning and significance for me, long before I even saw Elton and Eunice standing at the same spot, in their picture.

Eunice dated and cataloged almost every photo, and almost every experience. That night, she went through the album, sharing that treasure with me.

And at one point, Carrie pointed to the date in the album – September 27th 1979… the day I was born. Elton and Eunice were in Germany on the day I was born. We discovered that at the first time of me meeting them, less than a year after I came back from studying abroad in Germany. (And Carrie and I had met less than two months earlier, at a German club meeting.) 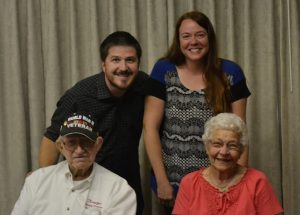 Elton didn’t share many of his War stories that night. I think he was just starting to talk about the sadness and power that he experienced while part of the force that liberated Europe. But over the next 15 years I would know him, he would share many stories, poems, and lessons gleaned from that time in his life, the time when The Greatest Generation declared that they were going over there, and that they wouldn’t come back until it was over, over there.

Elton’s time in the Army, and his time spent in service to his country, became a (and perhaps the) defining marker of his life. Though he went on to become a successful farmer, a known woodworker, a father to four girls, a grandfather to seven grandchildren, and many more great, and great-great grandchildren, it was clear when you met Elton that serving his country in World War II was among his very proudest achievements.

He was, in fact, a person who took part in what The Greatest Generation stood for. He had the kind of grit and resolve that only seems to come from being shot at by an unknown foe, and from working the dirt day in and day out, with your hands.

Eunice was the kind of lady you knew you wanted to know. She had really funny facial expressions which often seem to say, “Well, that’s just the way it is,” and that it was time to move on to talking about something else.

She was an avid player of card games, and when Elton was still mobile, we’d often enjoy time around their kitchen table all together, playing Jim Bronsky or a different game called Golf.

When Elton became a little less mobile, he would still shout out the answers (from his chair) to games like Trivial Pursuit, even if he had just declined an invitation to play. 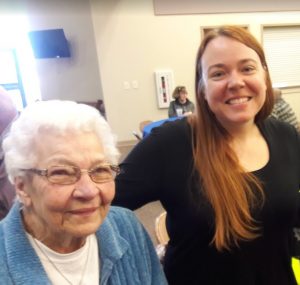 Eunice loved her garden, where she tended to a huge variety of flowers, butternut squash, rhubarb, asparagus, and other veggies. My favorite treat from Eunice’s Garden though, was the grape jelly she would make from her very prolific concord grape vine in the backyard. Grape jelly seemed to me to be such a part of Eunice’s life, that I was surprised to learn from Carrie, after Eunice’s passing, that the Grapevine was already planted and producing before they retired from farming in the 80s, and bought the house in Holyoke.

Another thing that people connected with Eunice, (at least in the minds of her grandchildren), was Eunice’s cherry swirl. Traditionally eaten on a Saturday or Sunday morning around brunch time, Cherry swirl is an almond flavored sweet dough that get sort of glopped into a pan and swirled together with cherries (either Frozen cherries preserved or cherry pie filling). It’s topped with icing. I didn’t know the significance of Eunice’s Cherry swirl until the time that Scott and Steve, Carrie’s cousins, got into a serious disagreement (as adults), because one was teasing the other about having gotten more than their fair share of cherry swirl.

You could not leave Eunice and Elton’s house with an empty stomach or with empty hands. They were always sharing from their kitchen, their garden, their home, and their lives.

Elton and Eunice knew a lot of phrases and sayings that I would love to hear brought back into popular usage. Elton’s trademark phrase was heard at almost every meal, “That’s some pretty good schtuff!”

I also learned from Elton and Eunice that the phrase, “That’s pretty ‘Rockefeller'” meant that something was of high enough quality to present to a Rockefeller. Something being Rockefeller was often used to refer to the richness and tastiness of a dessert, frequently a dessert that Carrie had made.

On multiple occasions, I heard Elton recite poems from memory. One that was near and dear to him was The Bivouac of the Dead. He would often recite the first stanza. I have included the full poem below.

Elton and Eunice were grandparents to me for more than 15 years. I will miss their humor, their can-do attitude, and their knowledge of the past and how things used to have to be done, because there truly was, at many times, no other option.

I will endeavor to carry on their legacy and what I learned from them in the way that they cared for their friends, family, and community.

Forever will I be grateful to Carrie for sharing these very special people with me, and grateful to both Elton and Eunice for the time that they took, the lessons that they offered, and the joyful times that were experienced around their table.

The muffled drum’s sad roll has beat
The soldier’s last tattoo;
No more on Life’s parade shall meet
That brave and fallen few.
On fame’s eternal camping ground
Their silent tents to spread,
And glory guards, with solemn round
The bivouac of the dead.

No rumor of the foe’s advance
Now swells upon the wind;
Nor troubled thought at midnight haunts
Of loved ones left behind;
No vision of the morrow’s strife
The warrior’s dreams alarms;
No braying horn or screaming fife
At dawn shall call to arms.

Their shriveled swords are red with rust,
Their plumed heads are bowed,
Their haughty banner, trailed in dust,
Is now their martial shroud.
And plenteous funeral tears have washed
The red stains from each brow,
And the proud forms, by battle gashed
Are free from anguish now.

The neighing troop, the flashing blade,
The bugle’s stirring blast,
The charge, the dreadful cannonade,
The din and shout, are past;
Nor war’s wild note, nor glory’s peal
Shall thrill with fierce delight
Those breasts that nevermore may feel
The rapture of the fight.

Like the fierce Northern hurricane
That sweeps the great plateau,
Flushed with triumph, yet to gain,
Come down the serried foe,
Who heard the thunder of the fray
Break o’er the field beneath,
Knew the watchword of the day
Was “Victory or death!”

Long had the doubtful conflict raged
O’er all that stricken plain,
For never fiercer fight had waged
The vengeful blood of Spain;
And still the storm of battle blew,
Still swelled the glory tide;
Not long, our stout old Chieftain knew,
Such odds his strength could bide.

Twas in that hour his stern command
Called to a martyr’s grave
The flower of his beloved land,
The nation’s flag to save.
By rivers of their father’s gore
His first-born laurels grew,
And well he deemed the sons would pour
Their lives for glory too.

For many a mother’s breath has swept
O’er Angostura’s plain —
And long the pitying sky has wept
Above its moldered slain.
The raven’s scream, or eagle’s flight,
Or shepherd’s pensive lay,
Alone awakes each sullen height
That frowned o’er that dread fray.

Sons of the Dark and Bloody Ground
Ye must not slumber there,
Where stranger steps and tongues resound
Along the heedless air.
Your own proud land’s heroic soil
Shall be your fitter grave;
She claims from war his richest spoil —
The ashes of her brave.

Thus ‘neath their parent turf they rest,
Far from the gory field,
Borne to a Spartan mother’s breast
On many a bloody shield;
The sunshine of their native sky
Smiles sadly on them here,
And kindred eyes and hearts watch by
The heroes sepulcher.

Rest on embalmed and sainted dead!
Dear as the blood ye gave;
No impious footstep here shall tread
The herbage of your grave;
Nor shall your glory be forgot
While Fame her record keeps,
For honor points the hallowed spot
Where valor proudly sleeps.

Yon marble minstrel’s voiceless stone
In deathless song shall tell,
When many a vanquished ago has flown,
The story how ye fell;
Nor wreck, nor change, nor winter’s blight,
Nor time’s remorseless doom,
Can dim one ray of glory’s light
That gilds your deathless tomb.